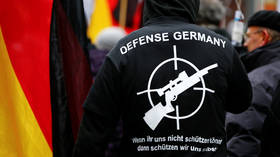 FILE PHOTO: A far-right protester wears a sweater that reads, "If you can't protect us - then we protect ourselves" © REUTERS/Wolfgang Rattay
German ultra-nationalists believe a civil war and an eventual demise of the state will come about, and are preparing for it by training to use firearms and explosives, a local security service has warned.

Germany’s domestic intelligence agency, the BfV, sounded the alarm over the rise of the underground far-right, according to Die Welt. An intelligence report seen by the paper calls for increased surveillance of so-called “preppers” – a loose network of ultra-nationalists who prepare for apocalyptic scenarios.

Those people are collecting firearms and other supplies in preparation for “a civil war” or “a feared collapse of public order” in Germany, the BfV revealed. The preppers movement, which first emerged in the US, has long been rooted in survivalism – which sees far-right militias making stockpiles of food, ammunition and medicine that they would use in the event of a doomsday scenario.

Separately, there is an alarming number of extremists who could plot attacks involving improvised explosive devices (IEDs) and small arms. Notably, many of those on the far-right were indoctrinated “a few months or years” ago, but were not known to the agency before joining extremist groups.

German ultra-nationalists usually radicalize through social media and right-wing chats, where the perceived spread of Islam and inflow of immigrants dominate most discussions, the BfV report said. However, far-right terrorist acts – involving IEDs, knives or arson attacks – remain poorly organized, as there are “blatant gaps between planning and reality.”

Nevertheless, some politicians say the far-right scene is a growing threat to public safety. “Right-wing extremist structures today are as dangerous for our democracy as they have ever been since 1945,” a Green Party MP told Die Welt.

This is not the first time that German authorities have voiced concern over far-right extremism. Last year, police made arrests of suspected ultra-nationalists who were plotting high-profile attacks on immigrants and “people of different political views.”

And in 2017, it was reported that police had carried out extensive raids in several German states on premises linked to the far-right, finding a list containing names, addresses and photos of over 5,000 politicians, mostly belonging to left-wing or liberal parties. The group that was targeted in the search included both an active-duty police officer and a lawyer who has denied that the document was a “kill list.”