[리비아/제국주의] The living nightmare of the civil war in Libya – imperialism is responsible! 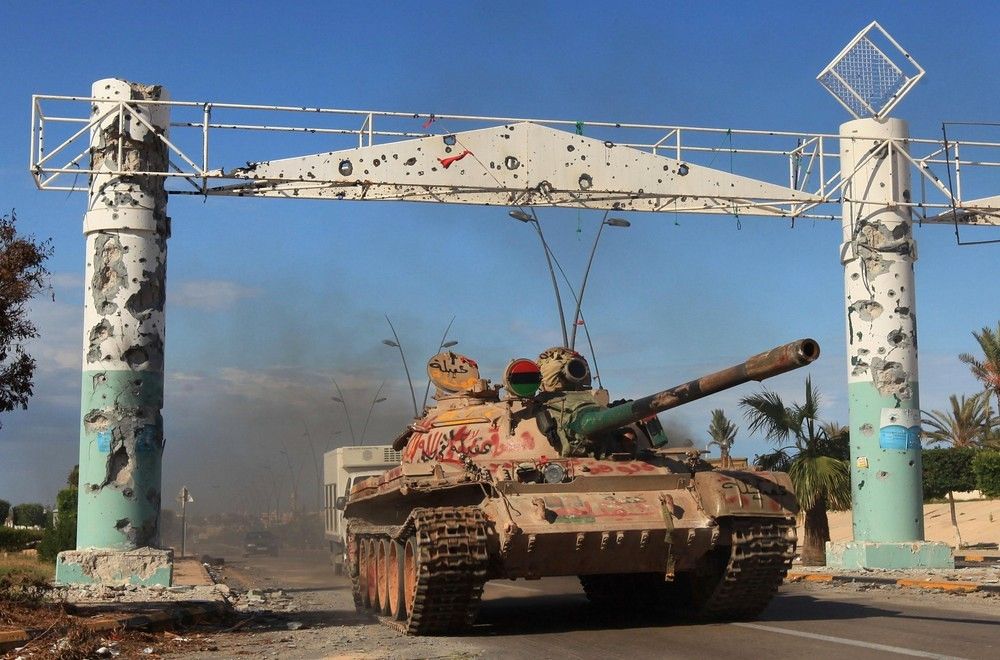 Libya is gripped by civil war. General Haftar has launched an offensive to oust President Fayez al-Serraj and his Government of National Accord (GNA), which is recognised by the UN. The offensive began on the same day that the General Secretary of the UN, António Guterres, arrived in Tripoli to secure a national reconciliation conference, scheduled on 14 April. His visit was useless, as the UN has been in Libya since 2011.

In reality, the UN organisation has had no other impact than to ratify the fait accompli, that is the result of the fighting on the battlefield.

The hostilities ended with a fragile agreement, reached in December 2015, between the General National Congress (GNC) based in Tripoli, headed by Al-Ghawil, and supported by Turkey and Qatar; and the Libyan House of Representatives based in Tobruk, in the Eastern region of Cirenaica.

The latter is controlled by Khalifa Haftar, the “strong man” of Cirenaica – supported by Egypt, the United Arab Emirates, Saudi Arabia and, behind the scenes (though less so now), by France.

The agreement has always been an empty shell, erected on the ground where the clash between the warring factions was held. Actually, the House of Representatives in Tobruk never approved Serraj as a legitimate president.

Warlords and the West

Serraj is the president recognised by the “international community”. But this does not mean that he represents a democratic government. He was not elected by anyone. Serraj was a candidate of compromise between several militias ruling the country, and has been their hostage since his arrival in Tripoli. Amongst the warlords who support this ‘champion of democracy’ are all sorts of reactionary and fundamentalist leaders, including Salafists from the powerful Misrata militias. But, as in Syria, western democracy is always ready to turn a blind eye as long as those brave ‘freedom fighters’ serve their interests.

Italy is one of the most important supporters of the Serraj government. Libya is a former Italian colony, and it has recently become the major gateway for the majority of migrants and refugees heading to Europe (and landing in Italy). The European Union has given €338 million to Libya to manage migration flows. Italy sent 10 patrol boats and signed an agreement to train the Libyan coast guards that, in effect, are commanded by the Italian government. 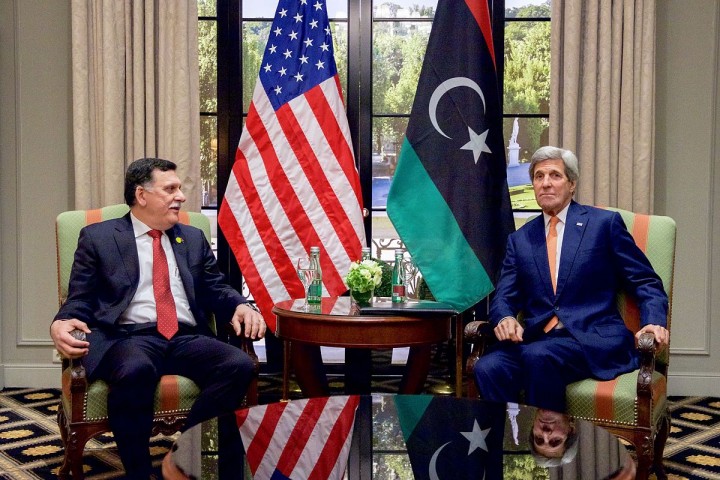 Serraj is the president recognised by the “international community”, but he was not elected by anyone. He was a candidate of compromise between several militias ruling the country / Image: U.S. Department of State

The deal between Serraj and Italy was the brainchild of the Democratic Party government, and only strengthened later by Salvini, the Interior Minister of the yellow-green government.

Italy has made Libya, or at least Tripoli, a huge concentration camp for migrants. The United Nations estimates that there are about 700,000 refugees in the country. Torture and killings happen every day, but, as long as they are out of sight, there are little complaints in the mainstream media.

But economic interests are at stake as well. Oil reserves are the largest in Africa and among the 10 largest in the world. Eni (the main Italian oil and gas company and the 11th biggest in the world), in tandem with the Libyan company Noc represents 70 percent of Libyan national production. Libya represents 15 percent of Eni’s total production. Total, the French oil company, doubled its production in the last three years. It is based mainly in Cirenaica.

The starting point for understanding what is happening in Libya is that the civil war is not the sole product of fundamentalist or fanatic bedouins, as some media sources suggest. It is a reflection of the clashes between the imperialist powers, at a regional and an international level, who are fighting a proxy war. The imperialists try to manoeuvre the players in that civil war like puppets. But sometimes the puppets rebel against their puppeteers.

Serraj remained in power thanks to the support of the “international community”. But apart from Qatar, Turkey and Italy, his main sponsor was the US, which assisted the Tripoli government with airstrikes against Isis in 2016. Since then, there were important changes in the policy of US imperialism in north Africa. In a meeting between Trump and the former Italian prime minister Gentiloni, Trump said: “I see no role for the US in Libya”. 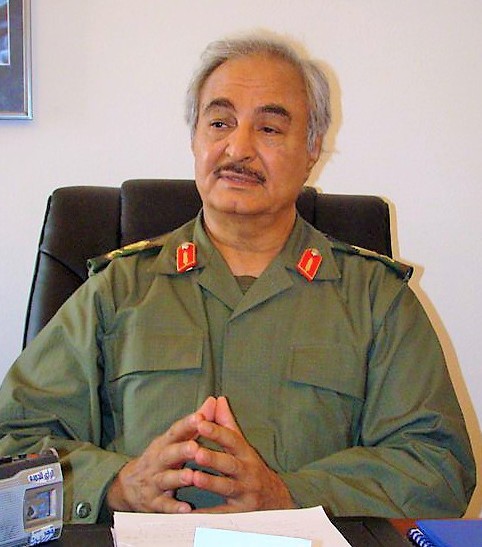 General Haftar has launched an offensive to oust Serraj, who is recognised by the UN, but it is halted for now / Image: Magharebia

After the US failure in Iraq, the Trump administration thinks it is better to avoid repeating the same mistake in Libya. A change of politics was the inevitable consequence. Haftar now is considered a “factor of stability” in the country (according to the Wall Street Journal). Just a few days before Haftar’s attack, the commander of US Africa Command (AFRICOM), Thomas Waldhauser met with Haftar. It was the first such meeting in the last two years.

A few weeks before, at the EU-League of Arab States Summit held in Sharm el-Sheik, Egyptian President Sisi, one the main sponsors of Haftar, was appointed as the “guardian” of the south of the Mediterranean and of Libya – to keep Europe safe from immigration.

On 27 February, Haftar met Mohammed bin Salman. According to the Wall Street Journal, “Saudi Arabia promised tens of millions of dollars to help pay for the operation, according to senior advisers to the Saudi government.” (12 April 2019)

The stage was set. Haftar started his offensive in the south of the country and the Libyan National Army (LNA) took control of the el-Sharara and el-Feel oil fields, which together produce close to 400,000 barrels per day. Now, the Tobruk government controls the majority of Libya’s oil production. An offensive towards Tripoli was the next step.

Indignation erupted from the western media. “It is an attack against democracy!”, “A dictator is conquering Libya!”. In the meantime, no one noticed that the contingent of US forces supporting the Tripoli government, was “temporarily relocated” outside the country on 7 April, precisely in the days when the fighting intensified.

The UN security council was not able to issue a motion on a ceasefire, because Russia and the US did not agree on it. Russia does not want to condemn Haftar, while US is buying time to see who is going to emerge as the winner. Later on it has emerged that US President Trump is in fact in support of Haftar.

In the meantime, Tripoli halted diplomatic relations with France: “Interior minister Bashagha said the halt of cooperation with France includes also training programs and other bilateral agreements, citing the French support for the ‘war criminal’ Khalifa Haftar.” (The Libya Observer)

Paris quickly denied any support for Haftar, but this was more a diplomatic answer than a sincere one.

Macron is deeply worried about the events in Algeria, where a revolution is unfolding and the regime could fall at any time. He thinks that Haftar could be a factor of stabilisation in the region.

Every imperialist power has its plan, but whether those plans will succeed is another matter.

A nightmare of capitalism’s making

Haftar’s offensive has halted, Tripoli has not been conquered yet.

Meanwhile, in Tripoli Serraj, is keeping up the appearance of resisting, although in reality the ones who are resisting are the militias, like the powerful one under Sabratha, that are now supporting the GNA. Serraj’s rule is extremely weak. Tomorrow, these same militias could easily decide to remove him if they think he has expended his usefulness.

The position of Italian imperialism (which is betting everything on Serraj) is pathetic, and reflects the decline of the Italian ruling class.

As Alberto Negri (one of the most serious experts in Italy on Middle-Eastern affairs) wrote:

“With the fall of Gaddafi in 2011, Italy inherited the worst defeat since World War II, aggravated by the behaviour of then-and-later-governments. The Prime Minister Conte on April 3 – when the Haftar offensive in the south had already begun on Eni's wells – arrived in Qatar, where he was joined by an enthusiastic Salvini: the minister had himself photographed with a machine gun at the arms fair, and had the accusations made in the past in Doha to foment terrorism have been totally set aside. Business is business. But no war is won with Qatar.” 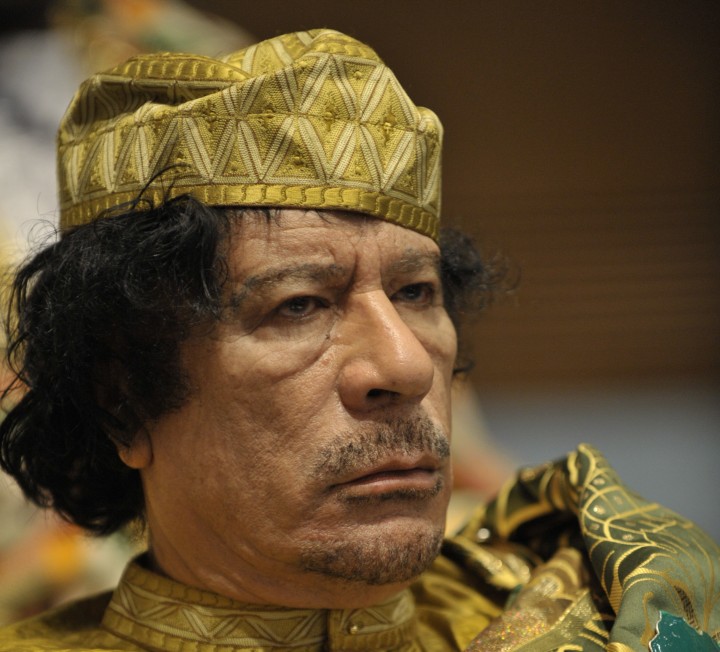 Imperialism unleashed contradictions and reactionary forces, sleeping for decades in the country that Gaddafi (who left the 1969 Libyan Revolution incomplete) failed to eradicate / Image: Jesse B. Awalt

The real losers in the Libyan civil war are the millions of ordinary workers and their families who are suffering and dying, together with the hundreds of thousands of refugees coming from all over Africa.

Imperialism thought that everything was resolved after the fall and assassination of Gaddafi in 2011. British and French imperialism pushed for it, imagining that they could sweep in and reap the riches, as they had in the past – but not this time.

Italy followed the US. Later, Obama said that the intervention in Libya was “the biggest mistake of [his] administration”. Not because he felt sorry for the civilian casualties, but because he was dragged in by other powers to which he was subordinate in the field.

Imperialism created a living nightmare in the country. It has unleashed contradictions and reactionary forces that were sleeping for decades in the country and that Gaddafi, who refused to carry the 1969 Libyan revolution to the end and oversee the abolition of capitalism, was not able to eliminate.

Libya in the ‘70s and the ‘80s was one of the most developed countries in Africa. A significant welfare state was developed and illiteracy was almost eradicated. The relative independence of the Gaddafi regime could not be tolerated by western imperialism which saw an opportunity to remove him under the guise of the arab revolution.

Better to create a living hell than leave in power someone we cannot really control, was the logic in Washington, London and Paris. This formula has been repeated many times, from Afghanistan to Iraq, and in the last decade in Syria and Libya.

It is really impossible to determine a clear perspective of the coming events in Libya. Too many factors are involved, amongst them the unpredictability of militias’ and warlords’ behaviour.

One thing is certain: imperialism is responsible and Marxists must start their analysis from a position of complete class independence from every imperialist power, and their institutions – UN and EU included.

The key for a solution in Libya comes not from diplomacy, but from the rise of class struggle in the neighbouring countries, like Algeria and Sudan. A successful socialist revolution in one of these countries could turn the whole situation around, also in Libya.