According to a report by the New York Times, United States officials have been meeting with Venezuelan coup plotters for over a year. 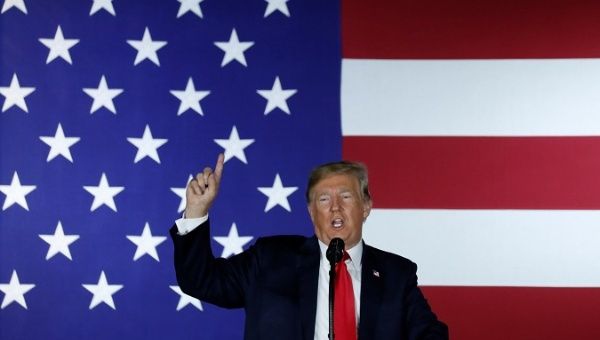 Venezuela's foreign minister reiterated his condemnation of the United States for seeking an intervention and supporting military conspiracies, following a report that members of the US government have been meeting with Venezuelan military officers who were actively plotting to oust democratically elected president Nicolas Maduro since mid-2017.

"Venezuela reiterates its denouncement and condemns the continuing aggressions that the U.S. government has directly promoted against the constitutional President @NicolasMaduro, democratically elected and re-elected by a wide electoral margin in May this year," Jorge Arreaza wrote on Twitter Sunday, a day after the New York Times report came out.

A day earlier Arreza also directly addressed the report and slammed the U.S. for meeting with coup plotters against Maduro. "We denounce the intervention plans and support for military conspirators by the government of the United States against Venezuela," he wrote on Twitter on Saturday. "Even in U.S. media, the crass evidence is coming to light."

Ernesto Londoño and Nicholas Casey, writers for the renowned New York Times, published a report Saturday detailing the exchanges between U.S. officials and Venezuela coup plotters. According to their account, the “secret” meetings were compiled from interviews with 11 “current and former” U.S. officials and a former Venezuelan commander, speaking under condition of anonymity.

Through the interviews, the writers were able to gather that conversations began after Trump declared in August 2017 that the U.S. had a “military option” for Venezuela, which “encouraged rebellious Venezuelan military officers to reach out to Washington.”

During the first meetings, one of the attendees allegedly told U.S. officials they could convince small groups within the Venezuelan military to plot against the Maduro government.

Aside from confirming what the Venezuelan government has repeatedly warned against, namely the active plotting against the Maduro government by “political opposition” and U.S. participation, Londoño and Casey also revealed that the U.S. designated a career diplomat to attend the conversations, listen and report on them.

A senior U.S. administration official who also spoke to the reporters under the condition of anonymity said the Trump administration had considered dispatching a veteran Central Intelligence Agency official, Juan Cruz, but later decided “it would be more prudent to send a career diplomat instead.”

The NY Times article claims that “in the fall of 2017, the diplomat reported that the Venezuelans didn’t appear to have a detailed plan and had shown up at the encounter hoping the Americans would offer guidance or ideas.”

However, the officers had explicitly “asked the U.S. to supply them with encrypted radios, citing the need to communicate securely, as they developed a plan to install a transitional government to run the country until elections could be held.” Londoño and Casey report U.S. officials did not provide material support, and “the plans unravelled after a recent crackdown that led to the arrest of dozens of the plotters.”

On August 4, during the  Bolivarian National Armed Forces 81st-anniversary celebrations, two drones packed with C4 exploded in an attempt to assassinate president Maduro, several other government officials and guest. Over 40 people, including opposition legislator Julio Borges and retired colonel Oswaldo Garcia, have been linked to the attack.

The current state of the relation and collaboration between U.S. and Venezuelan officials to topple Maduro is unknown.