US multinational corporations are plundering the populations of the United States and the world to the tune of trillions of dollars by driving down and evading taxes on profits booked overseas. This is the conclusion that emerges from a recent study by University of California at Berkeley economist Gabriel Zucman and British economist Thomas Wright.

Their paper, titled “The Exorbitant Tax Privilege,” points to the use of US military violence to drive down taxes on American oil multinationals by oil-producing states and a massive expansion of non-oil US firms booking their overseas profits in tax haven countries to generate huge tax savings and increased profits. The statistics the authors provide translate into $180 billion a year in tax savings on US multinationals' overseas operations.

This is money diverted from government revenues in the US and around the world and funneled into the bank accounts and stock portfolios of the global financial oligarchy. In what amounts to an international extortion racket and swindling operation, the US government and both big business parties function as the enforcers of the American corporate elite.

Zucman and Wright note that oil-producing states in the Middle East and elsewhere slashed their tax rates on US oil companies from an average of 70 percent between 1966 and 1990 to an average of 45 percent following the first US-led Gulf War in 1990-1991. 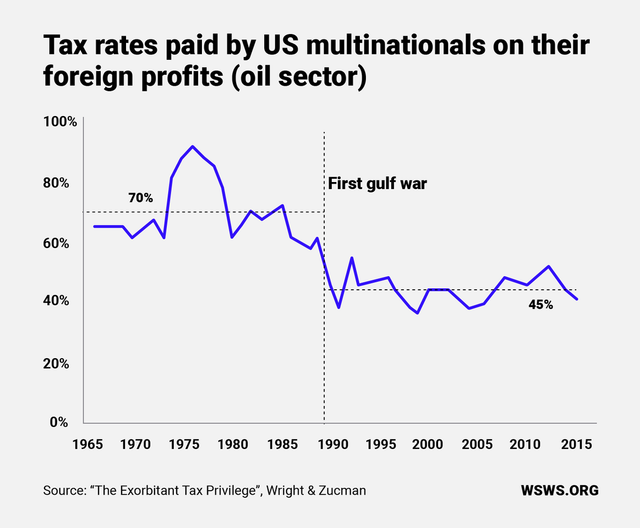 They write: “The foreign tax rates of US oil multinationals fell significantly after the first Gulf War, during which the United States (and a number of other countries with significant investments in oil) intervened to protect Kuwait, a major oil producer.

“Although it is not possible to know for sure what caused this decline, a possible interpretation of the fall in the taxes collected by oil-producing countries… is that they reflect a return on military protection granted by the United States to oil-producing States.”

This is diplomatic language to suggest that the United States used its destruction of Iraq through military violence and deadly sanctions to extort foreign governments to lower their tax rates on American multinationals. To put it more bluntly, the super-profits obtained by ExxonMobil and other mega-monopolies are based in significant part on the blood and bones of millions of men, women and children killed and injured in Iraq, Libya and other Middle Eastern oil-producing countries, as well as tens of thousands of US soldiers.

Non-oil US multinationals have effected a dramatic reduction in taxes paid on overseas investments primarily by accelerating the shift of profit bookings to tax haven countries. Zucman and Wright report that American multinationals’ profits booked in offshore tax havens increased from 20 percent of total US overseas profits in the first half of the1990s to 50 percent today. 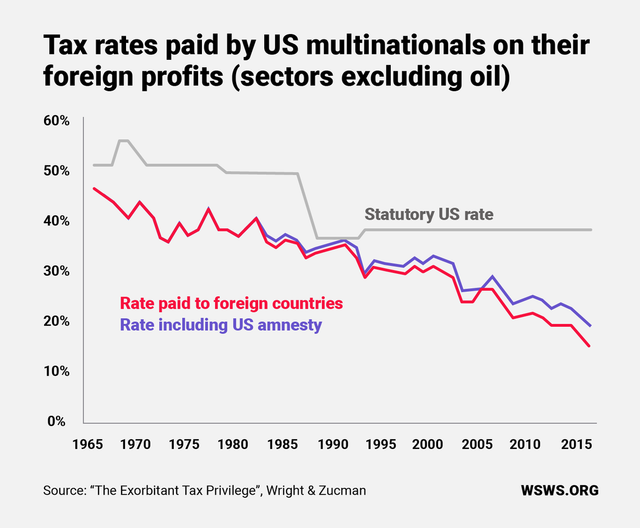 The write: “The effective foreign tax rate of US multinationals in sectors other than oil has collapsed since the mid-1990s. While part of this decline is due to the fall of corporate tax rates abroad, by our estimates almost half of it owes to the rise of profit shifting to tax havens.” These havens include countries such as Ireland, Luxemburg, the Netherlands, Switzerland, Singapore, Bermuda and Caribbean tax havens.

The sharp increase in the shift of overseas profit bookings to tax haven countries began with the removal in 1996 of US Treasury restrictions on tax avoidance by such means. The fact that the change took place under the Democratic Bill Clinton administration underscores the bipartisan character of the systematic reworking of tax laws to effect an ever-greater transfer of wealth from the working class to the financial elite.

Zucman and Wright point out that US multinationals use tax havens far more than multinationals based in other countries. They estimate that half of all global profits booked in tax havens are shifted by US multinationals. The practice is considerably less widespread in other major economies that comprise the Organization for Economic Cooperation and Development (OECD), where anti-tax avoidance laws remain in place. About 25 percent of profits from tax havens go to European Union countries, 10 percent to the rest of the OECD, and 15 percent to developing countries.

The $1.5 trillion tax cut signed into law last December by President Trump, the benefits of which go overwhelmingly to corporations and the rich, provides additional windfalls for US multinationals that have parked trillions of dollars in profits in foreign tax havens to evade US taxes. Besides cutting the legal corporate tax rate from 35 percent to 21 percent (the real, or “effective,” rate is much lower), the law allows companies such as Apple and Google to repatriate their overseas profits at a discounted tax rate of 8 percent to 15 percent, depending on the nature of the assets.

That law has already sharply reduced the amount of taxes being collected by the federal government from major corporations, leaving their rich shareholders wealthier and the government deeper in debt. Just between January and June of this year, government revenues from corporate taxes dropped by almost $50 billion from the previous year, a decline of one-third.

The cynical claim that corporations would use their tax savings to create more decent-paying jobs has already been exposed by record rates of corporate stock buy-backs and dividend increases. US big business is using its tax boondoggle to reward the bankers, big investors and CEOs with billions in additional wealth—to buy more and bigger yachts, private islands and personal jets—while squandering more resources produced by the labor of the working class on parasitic financial operations.

The estimated $180 billion a year in reduced taxes on foreign earnings by US multinationals is five times the $30 billion per year needed to eradicate world hunger.

These statistics shatter the lie, constantly recited to justify cuts in social programs and workers’ wages and benefits, that “there is no money” to pay for such things. They underscore the fact that no progress can be made in meeting elementary social needs without a frontal attack by the working class on the fortunes of the US and international oligarchs.