[미국/ 이스라엘] Imperialists celebrate 70 years of Israel with a bloodbath

Palestinians had to flee gas canisters and live ammunition

The spectacle of celebrations for the opening of the new US embassy in Jerusalem on Monday 14 May stood in stark contrast with the bloodshed in Gaza, where on the same day, 59 Palestinian demonstrators were killed and more than 2,700 injured by Israeli snipers.

As we stated in a previous article, the mass resistance movement by Palestinians in Gaza for the right of return for the Palestinian refugees of 1948, and against the 12-year-blockade by Israel, has been growing despite the harshest repression by the Israeli Army.

Trump’s decision to move the US embassy and recognise Jerusalem as Israel’s capital has further radicalised the movement. It was a conscious provocation against the core demands of the Palestinian national struggle. The date was also deliberately chosen to coincide with the celebration of the 70th anniversary of the proclamation of the State of Israel in 1948, which precipitated the forced expulsion of more than 700,000 Palestinians from their homes – a date remembered by the Palestinians as the Nakba (catastrophe). 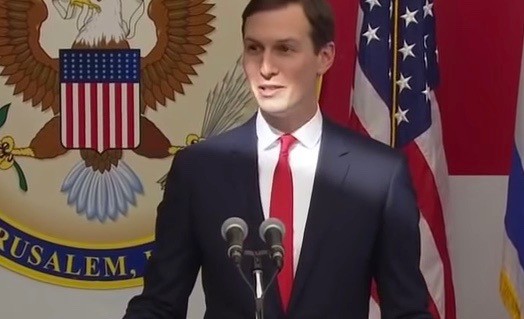 Jared Kushner Senior Advisor to the President of the United StatesJared Kushner and Ivanka Trump (presiding over the celebration as Senior White House Advisors) were pictured smiling along with Netanyahu and the cream of the Israeli ruling class, making the position of the US government abundantly clear. Jared Kushner’s remark that “those provoking violence are part of the problem and not part of the solution,” while dozens of peaceful demonstrators were being gunned down in Gaza is just another show of the stinking hypocrisy that has become a trademark of US imperialism’s diplomacy.

The scale of the killing and maiming alone tears apart the picture presented by the Israeli government, and echoed recklessly by the US and UK governments and international media. That is, these deaths were the result of Palestinian aggression and attempts to violate the border, orchestrated by Hamas: the sinister force cynically disguising an army of terrorists under the semblance of peaceful protest.

The use of lethal force by the Israeli snipers, according to the Israeli government propaganda, would be a “measured response” to a fundamental threat to the very existence of Israel. The Israeli government’s real commitment to elementary human rights was revealed by the infamous comment by Defence Minister Avigdor Lieberman, who said there were "no innocent" people in Gaza.

However, the bloodiest day since the 2014 Israeli attack on Gaza tells another story.

The relatively peaceful character of the protests, in the face of bloody repression, is a testament of a renewed will to carry out resistance on a mass basis, as the only way to undermine the effective Israeli occupation of Gaza and the West Bank.

There was no serious threat that the protesters would be able to breach the border over the past month of protests, nor there could have been. The Gaza border has been built with the most advanced technologies and is constantly monitored and defended by overwhelming military force. The images and video footage showed families’ peaceful protests with barbecues and picnics along the border being turned into carnage by a rain of fire and tear gas. What can be clearly seen is Palestinian youth defying the most advanced weaponry, in the hands of trained snipers, by flying kites across barbed-wire fences, attempting to beat back tear gas canisters with tennis rackets, or simply by showing they won’t be cowed by bullets, even at the risk of their own lives. 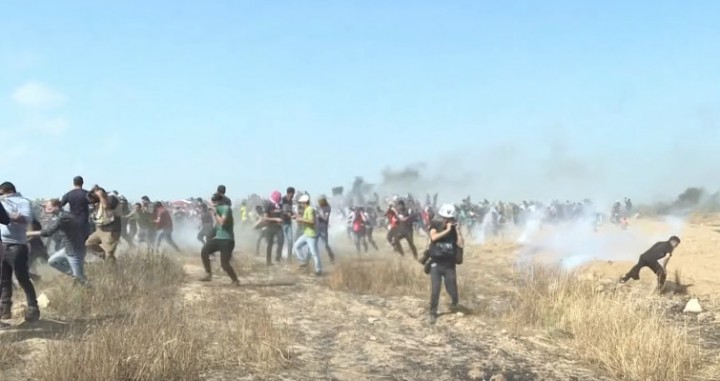 What has become more and more apparent to anyone with no vested interest in spreading the Israeli state’s propaganda is a growing heroic defiance by the Palestinian youth against the intolerable conditions bestowed upon them. Day after day, the protests along the border over the past month have been peaceful, despite the lethal response by the Israeli army. There are no casualties among Israeli citizens or soldiers, while the death toll among the people of Gaza since 30 March is now well above 100 (and growing) and more than 12,000 people have been seriously injured by live ammunition or tear gas canisters rained on peaceful protesters.

The targeting of journalists or photographers documenting the massacre and denouncing the systematic use of explosive bullets – aimed at maximizing the wounds inflicted – not to mention the shooting of doctors and ambulance staff trying to assist the injured while wearing visible vests, speak for themselves.

Crisis of the Palestinian leadership and the ‘two-states solution’

Hundreds-of-thousands of Palestinians are drawing the bitter conclusion, after decades of negotiations and wasted promises by the different factions of the Palestinian leadership, that only a mass resistance movement can advance their demands. This mood is particularly strong among the youth, whose future is being denied under their present, intolerably oppressive conditions. 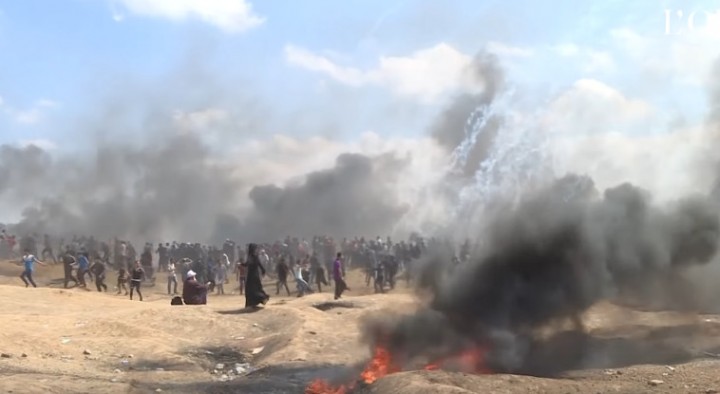 The Palestinian Authority, under the leadership of Abbas and Fatah, has proved in the last two decades – beyond any doubt – that the pretence of building an independent Palestinian state under the imperialist patronage of the Oslo and Madrid Accords (which left in the hands of the Israeli ruling class all the threads of strategic control over the economy), was just a reactionary utopia.

The mix of endemic corruption on the part of the Palestinian elite and their commitment to collaboration with the Israeli state in policing the Palestinian people (the security cooperation with Israel, which Abbas has previously termed ‘sacred’), together with slow economic strangulation and ceaseless Israeli support for land-grabs and illegal Jewish settlements in the West Bank, have fully discredited the policies of Fatah, along with the moral and political authority of its leadership.

On the other hand, it is clear that Hamas is playing a game aimed at resurrecting its declining support by putting up an apparently defiant stand against Israel – a tactic it has applied many times in the past. But the ongoing mass protests at the Gaza border reflect a different situation, which is not at all under Hamas’ control. There is a growing understanding that the tactic used by the Hamas leadership of engaging into an asymmetric military battle against overwhelming Israeli forces has only made things worse, and only mass resistance can break the 12-year blockade of Gaza.

Both Fatah and Hamas have thrown the Palestinian liberation struggle into a blind alley. The mass resistance of tens-of-thousands of Palestinian men, women and youth is exposing the brutality of the oppression they are subjected to from the Israeli State. It is also opening a new perspective for the struggle of the Palestinian people in face of enormous obstacles. It deserves the full solidarity of the international workers’ movement.