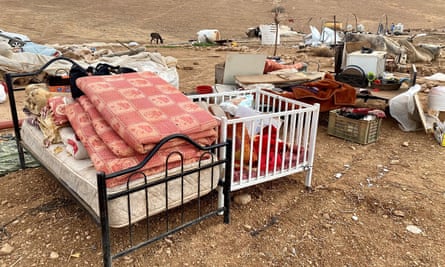 The belongings of 73 people who were forcibly displaced by Israeli forces stand in the Jordan Valley in the occupied West Bank. Photograph: United Nations
Oliver Holmes in Jerusalem
24,131

Israeli forces in the occupied West Bank have razed a Palestinian village, leaving 73 people – including 41 children – homeless, in the largest forced displacement incident for years, according to the United Nations.

“These are some of the most vulnerable communities in the West Bank,” said Yvonne Helle, the UN humanitarian coordinator for the occupied Palestinian territory.

Three-quarters of the community lost their shelters during Tuesday’s operation, she said, making it the largest forced displacement incident in more than four years. However, by the number of destroyed structures, 76, the raid was the largest demolition in the past decade, she added.

On Wednesday, families from the village were seen rifling through their wrecked belongings in the wind, with some of the first rain of the year arriving the same day. The UN published a photo of a bed and a cot in the open desert.

The village is one of several Bedouin and sheepherding communities in the Jordan Valley area that is located within Israeli-declared army training “firing zones”, and despite being within the Palestinian Territories, people there often face demolitions for a building without Israeli permission.

“Palestinians can almost never obtain such permits,” said Helle. “Demolitions are a key means of creating an environment designed to coerce Palestinians to leave their homes,” she said, accusing Israel of “grave breaches” of international law.

Nearly 700 structures have been demolished across the West Bank and East Jerusalem in 2020 so far, she said, more than any year since 2016, leaving 869 Palestinians homeless.

Israel’s Civil Administration, the body tasked with running the occupation, said it had carried out an “enforcement activity … against seven tents and eight pens which were illegally constructed, in a firing range located in the Jordan Valley”.

Israeli forces also destroyed more than 30 tonnes of food for livestock and confiscated a vehicle and two tractors belonging to three residents, the group added.

“But the wiping off of a whole community at once is extremely rare, and it seems like Israel was making use of the fact that everyone’s attention is currently set elsewhere to move forward with this inhumane act,” he said in reference to the US election.

Israel captured the West Bank from Jordanian forces in 1967 and continues to control and occupy the area, although Palestinians have limited self-rule over small enclaves.

The country’s hardline prime minister, Benjamin Netanyahu, said he intends to annex large swathes of occupied Palestinian territories, including the Jordan Valley, although the plan was temporarily “suspended” as part of a deal with the United Arab Emirates.